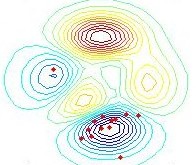 user is not required to set the parameters of the Differential Evolution, a process that could be extremely time consuming, since the best settings of the parameters are problem-dependent. Instead, MP-AIDEA is able to automatically adapt these parameters during the optimisation process. At the end of the Differential Evolution a local search is run from the best individual of each population. Using the restarting mechanism of Monotonic Basin Hopping in combination with the Differential Evolution, the populations are able move, in a funnel structure, from one local minima to another, until the global minimum of the problem is located. MP-AIDEA implements a novel approach to avoid multiple detection of the same local minima, by restarting the population in the entire work space when it falls within the basin of attraction of an already detected minimum.Extensive tests have been conducted on the algorithm using several difficult academic test functions and real world problems, in order to assess its validity.

Some unpublished, yet interesting results obtained via MP-AIDEA can be found here.