Summary: Hybrid optimal control problems are generally defined as problems in which an optimal control law is dependent on a mix of continuous (dynamical) and discrete (categorical) variables. Typical examples can be found in path planning, in which motion control depends on a number of discrete events and continuous dynamics, in the design of re-entry and ascent vehicles, in which shape and configuration of the vehicle have a substantial impact on its dynamics, in Air Traffic Management or in the integrated design of plant system and process. A number of approaches exist, most of them are based on a two-level optimisation process in which an inner continuous optimisation loop 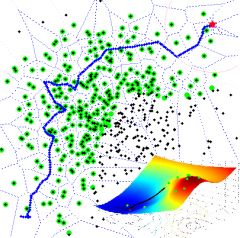 solves for the continuous variable and an outer combinatorial optimisation loop handles the discrete (or decision) variables. One major difficulty is that the inner loop generally returns values of cost function and constraints that are very noisy and might not necessarily be globally optimal. The outer loop, therefore, has to make decisions on the categorical variables using noisy and incomplete information coming from the inner loop. This difficulty is exacerbated by the dimensionality of the problem, as low dimensional problems are hardly of any practical interest. Although, single level approaches exist, solving combinatorial and continuous variables in a single loop might become intractable and anyway not competitive against two level approaches. A theoretical presentation of hybrid optimal control problems in mission planning was presented by Ross and D’Souza in 2005 but without providing a solution approach. More recently some examples of solution approaches can be found in the work of Conway et al. for the case of low-thrust gravity-assist trajectory planning. These examples, however, are limited to the treatment of single objectives or performance criterion.
This program of research instead, aims at tackling problems with multiple criteria, typically time and cost although other criteria can be considered, such as data collection and delivery, coverage, access time, etc. A promising way to deal with multi-objective hybrid optimal control problems is to use memetic strategies, combining mathematical programming with population-based stochastic search algorithms. This project aims at developing efficient memetic strategies to address large scale hybrid optimal control problems integrating operation planning, topology (or configuration).
These techniques can be easily integrated in the framework of Multi-Agent Collaborative Search a memetic solvers, developed at the university of Strathclyde, combining local neighborhood search an multi-population exploration based on Differential Evolution heuristics. The target application is solve problems in which operation planning, spacecraft control and spacecraft design are concurrently optimized to maximize multiple performance criteria.