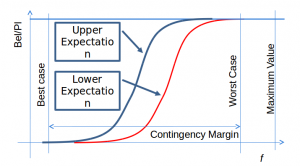 The Evidence Theory, developed by Shafer from Dempster’s original work, has be proven to model adequately both types of uncertainty. First, the Evidence Theory does not request additional assumptions when the available information is poor or incomplete. For instance, evidence on the event {A or B} does not imply/require information on both events {A} and {B}. Similarly, the knowledge of an event does not imply knowledge of its opposite (for the probability theory P(A)=1–P(A)). Secondly, this theory introduces two uncertainty quantification, the Belief (Bel) and Plausibility (Pl). Comparatively to probability, Bel and Pl can be seen as defining lower and upper probabilities, Pl including the uncertainty, Bel excluding it. This approach allows for the uncertainty quantification to conform to, and only to the available information. Finally, two complementary cumulative functions (CCF) are defined. These functions are at the Evidence Theory what a cumulative distribution function is at probability. In the case of f, function of a vector x of uncertain parameters, they express the belief (CCBF) and the plausibility (CCPF) that f(x) < µ.
Evidence Theory is an interesting way to model uncertainty to increase the reliability of a space mission design. However, the application of this theory to complex engineering cases has faced significant problems, such as the choice of combination rule of information sources or the discontinuity of the CCF. Moreover, a critical issue with a high number of design parameters is the computational cost. The time required to compute each CCF is increasing exponentially with the number of parameters and the number of intervals specified for each parameter. In addition to that, the minimum and maximum values of the objective function should be calculated for each interval. A few solutions have previously been studied to address these issues. Solutions like those proposed by Bae et al. are insufficient to deal with the complexity of space mission design problems Indeed, to compute both CCF, the maximum and the minimum of the system function f has to be calculated for each different combination of parameter intervals. As an example, for a 10 parameters system, considering 10 intervals per parameter, 20 billion of vertices have to be evaluated. A solution is to use parallel computing, which could significantly improve performance. However, this mitigates but does not solve the problem’s complexity.
An idea under investigation is to define a criterion on the combinations of parameter intervals to decide if it is necessary to compute the minimum and maximum of the system function. Indeed, if there is enough information to say that f(x) < µ over a set of parameter intervals, then its corresponding belief (or plausibility) can be added in the CCF without calculating precisely the vertices. In addition to this, connected intervals could be considered as a single one if, once again, the criterion assures the constrain would be verified. This way, the number of intervals combination could drop dramatically, limiting even more the amount of required computations. By this approach we can incrementally add pieces of information to build up the belief and plausibility, though at every stage, Bel and Pl are only approximated. Finally, to compute the vertices of expensive functions, we here propose to also use surrogate models. Kriging predictors or Radial Bases Functions are currently envisaged to model the system function f.